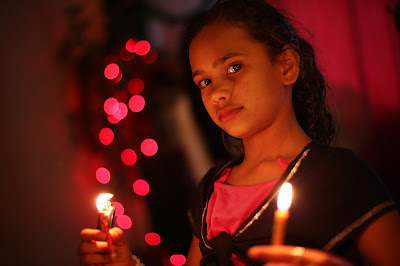 Shortly after young Melburnian Genevieve Bailey’s father died, she embarked on her first trip overseas intent on doing something with her life.

Most people in her position would have thrown themselves into a series of hedonistic backpacking adventures, but not Bailey. Armed only with a digital video camera and unbridled optimism, the 20-something filmmaker set off to interview a wide range of children about their experiences of being 11 years old in a world that is changing as rapidly as they are themselves.

From Thailand and India to France and Japan, over the next four years more than a dozen 11 year olds – some affluent, some poor; no longer quite children, but not yet teenagers – spoke candidly and openly to Bailey about love, war, global warming, music, terrorism, culture, family, happiness, religion and the future.

Bailey's resulting documentary, a composite portrait of children around the world, is heartwarming, charming and life-affirming: a remarkable and engaging tapestry of young hopes, fears and dreams.

Melburnian Jamira talks about how proud she is of her Indigenous heritage and her father, who is raising her singlehandedly; young Frenchman Remi speaks passionately about his disdain for racism and his country’s failure to deal with inequality and poverty; and in Thailand, Jack and Goh share their experiences of working in an elephant sanctuary.

Bookended by Bailey’s deeply personal introduction to the documentary and a summing up of the experience of making it, the film includes sequences in which the young protagonists reveal startling insights into bullying and mental resilience, sweetly innocent attitudes towards romance and relationships, and remarkable self-awareness as they speak about not wanting to grow up too fast.

The patchwork assemblage of footage is linked together by the children’s commonalities and shared experiences, such as a series of discussions about bullying; a guided tour of their homes; a sequence of dance routines. Though one occasionally wishes for more extended interviews rather than constant snippets of discussion, the overall effect is both detailed and delightful.

At numerous times while watching the film I was choking back tears; at other moments I was laughing unrestrainedly. Insightful, compassionate and poignant, I Am Eleven is highly recommended.

Posted by richardwatts at 11:53 pm

This sounds very interesting. I'm curious to see how their attitudes differ, if at all, across the various culture. Have to look out for this :)

Please take a look at 306, a gay short film, written, directed & produced by Melbourne born film maker Elliot London.
Please would you post it on your website and/or share it with your friends.
Warning: adult minded. http://vimeo.com/32775696